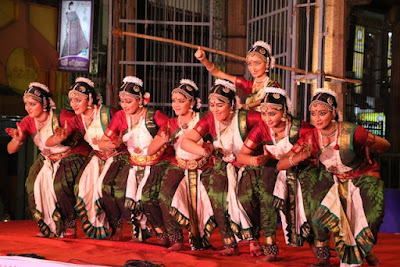 We have followed the dance productions of Bharatanatyam dance guru Sasirekha Rammohan since she is based in the Mylapore area and the recitals are held at local sabha halls.
We first sat through her 'Bharathi kanda Bharatham' production at the Tamil Nadu Iyal Isai Nataka Manram campus in Chennai some six months ago. The music, scored by Rajkumar Bharathi, his great grandson was 'live' at that premiere.


Sasirekha then chose to tighten the production and record the music in a studio. This did the smart magic. The p[roduction value improved. And this showed at the Festival's evening show in Sannidhi Street. People sat through it as late as 9.45 pm - when the curtains where drawn on Day One at Fest 2016.
Posted by Vincent D' Souza at 5:09 PM